Preemptive disclaimer: Only a couple of the photos included herein are actually relevant to the subject matter, but a blog post with no photos isn’t very visually interesting, now is it?

We awake early, at 5:30am, and despite intentions to leave by 6:30, are hiking by 6:45. Twenty minutes later, we reach our objective. The boulder is still clothed in tree shade, part of the motivation for our early expedition. I glance up from the roll of athletic tape I’m wrestling and catch a glimpse of motion across the draw. As my eyes adjust to the sunlight reflecting off the golden dry grass, the shape and movement of a coyote comes into focus: the shy posture of the neck, the arch of the spine, the droop of the tail, the loping trot. It’s in no hurry to return to the cover of the Ponderosa forest, and we’re frozen with intrigue and respect as we watch it make its way along the subtle slope. Even our excitable blue heeler is quiet, rapt. Almost a full minute later, her wild relative ducks into the trees and blends away. 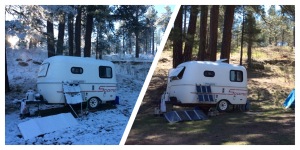 A month ago, In the middle of May, we awoke to an inch of snow. Today, at 8am we estimate the temperature to be about 70˚f. Charlie says I do well in the heat, and he might be right. I send at 9:30. By 10 it has to be close to 90. Conditions are not optimal. While pockets are a better choice than crimps in the heat, the horizontal limestone roofs of the Draw start to feel greasy and slick, and at some point no amount of holding on can help. Our day is done by 11:30am. The columbine, cacti, and Indian paintbrush are already blooming. The lowest buds on the lupine spikes are beginning to burst. It’s only June, but summer has come to northern Arizona. It’s averaging 13 degrees Fahrenheit above normal, with several days of all-time record highs. It’s time to go.

Temperatures everywhere are off the charts. We hear that record highs are rampant in the southwest, not just daily highs, but all-time highs. 2016 was the warmest year on Earth in recorded history. We hear that it’s not just here, but it’s happening around the globe: men in France are wearing skirts to help deal with the unbearable heat; a forest fire in Portugal, where forest fires are a new thing in the past 10 years, has killed dozens of people; and London, England saw a 94˚F day in June. It’s no wonder we’re getting angrier, and meaner, and lazier. But it seems like people can get used to just about anything.

In this country, where so much of religion appears to be intent upon getting that pesky “evolution thing” out of the way of Faith-with-a-capital-F, a huge majority of the population is totally unaware of what our sun is, what it does apart from lighting our days, and how it actually does so. It’s a black hole that has spun its way into many of our schools, where science is only acceptable when it can coexist with a literal interpretation of the Bible: the earth is only 6000 years old (based on six busy days and a bunch of begettings), mankind was created in the Garden of Eden, and the Sun added as an afterthought. The astronomical history of our planet doesn’t exist. The eons of light and dark that brought life to organisms and destroyed them as easily didn’t exist. The biblical concept of Creationism has wormed its way into textbooks while the very Bible itself is well along its way to becoming one, if the religious right continues its infiltration of the U.S. government. To those who hold literal beliefs that a virgin can give birth, that a mere mortal can carry under his arms golden tablets that had to weigh about 1000 lbs each, or that (of you’re male) there are a thousand virgins awaiting you after death, well, it might not even seem too far fetched to believe that the earth is flat, despite the existence of visual evidence to prove otherwise. It’s not difficult to convince them that the danger is dramatically overstated by tree hugging, socialist atheists, and that it will cost too much in money and jobs to reduce greenhouse gas emissions. Dollars and education comprise the most potent recipe for either ignorance or intelligence, depending on the way they’re stirred.

For us, living out in the elements, it’s impossible not to notice the change in the meteorological patterns of familiar places. Spring and Fall, historically ideal climbing seasons in most areas, are significantly shorter than they once were. Higher elevation “summer crags” aren’t quite the respite from the heat they used to be. The dogged persistence of the El Niño three years and running has strongly diluted the accuracy of long-term forecasts.

Despite our best efforts, Charlie and I will not live forever. Our little lives are the equivalent of less than a nanosecond on the astronomical clock. We understand that humankind isn’t likely to exist forever, but the thought that we have a direct effect on the longevity of our species matters to us. Sure, we have a personal interest in the immediate future, for Charlie’s grandkids and their kids, but we also have an affinity for the connectedness of our kind to our planet, and our planet to the universe. It’s late in the game, but all is not yet lost. Dollars and education; we may not have much of the former, but we definitely have the tools and voices to work with the latter.

Bundled up in May.

Our inspiration to try hard: Katch!

A good spot is crucial when you’re seating off holds. 📸 Helen Padilla
A couple things: 1. Although we’re not professional photographers, the pictures we take and use are, well, ours. Friends and readers are welcome to repost them on Facebook or other personal social media accounts, but please ask if your intention is to use them for any sort of business or product promotion outside of our established relationships. We post photos taken by others with their permission, which you should also obtain if you wish to use them. 2. The ads below show up because we’re too frugal to pay enough to make them go away. They’re not usually for anything we endorse or support.