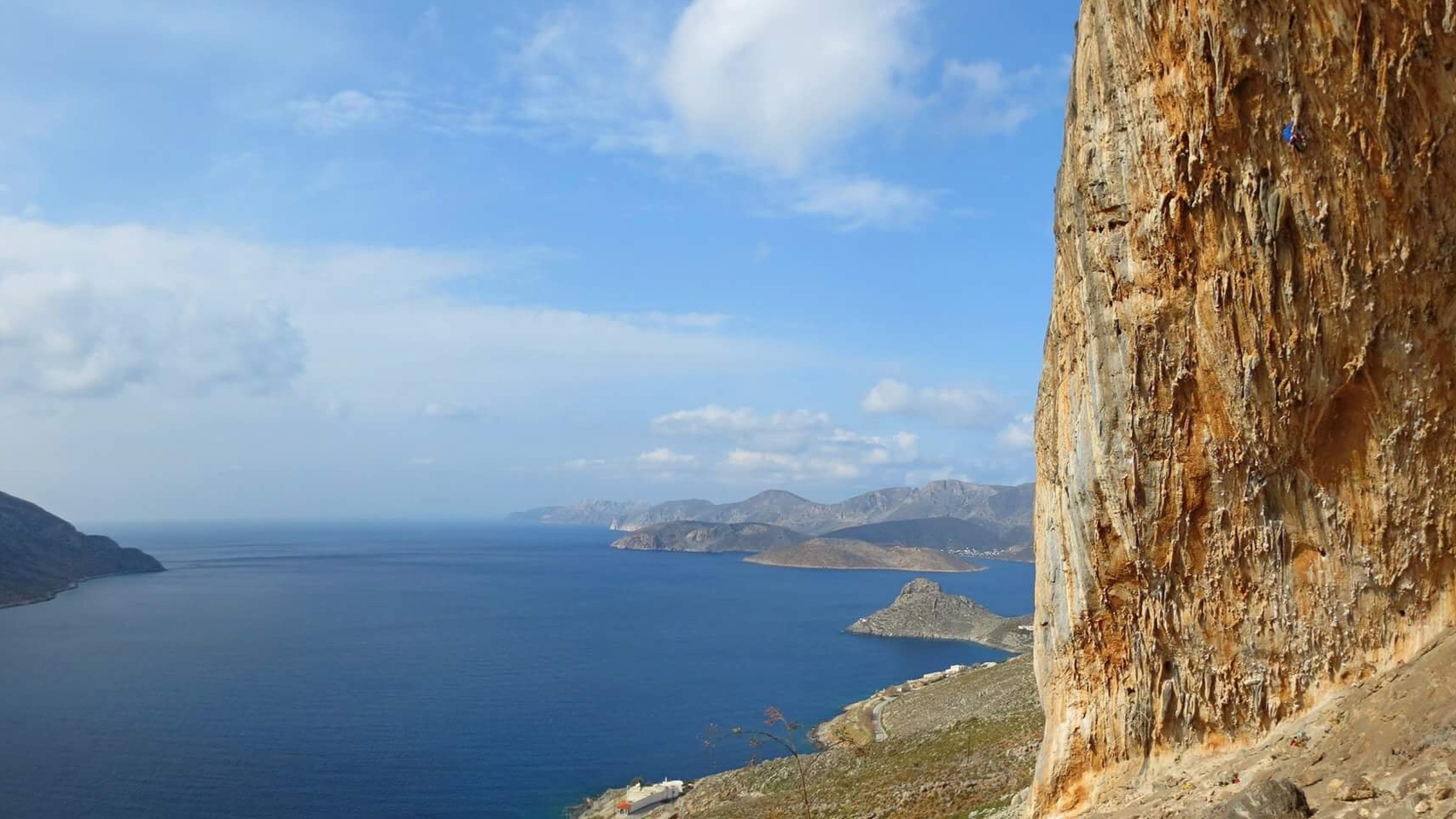 Welcome to paradise. We are in the climber’s version of Mecca. Mere words cannot describe how enjoyable climbing and life are on this tiny little island. Kalymnos is located in the Aegean Sea only a few minutes flight time from the proverbial cradle of civilized human development. Greece has a culture rich in well-deserved and pride-filled history, which the locals love sharing. Just ask Babis, our outstanding host here at Agelica apartments atop Babis’s Bar and snack shop. Think Ricardo Montalban and the popular old television show Fantasy Island.

As luck would have it, the indigenous people are welcoming and their English is proficient enough to make life easy for us. At times we are challenged by the food choices in the local markets, since nearly everything is labeled in Greek. No worries, we’re on “holiday” (that’s “vacation” for us Americans) with no set agenda other then to climb when inspired and rest when needed. It gives us plenty of time to experiment with the robust local cuisine. Here you have only one choice, which is organic. Kalymnian food is full of taste, unlike the watered down version typical of America’s high production food choices. As an example, the Greek yogurt here is thick, rich and creamy. And it’s simply called “yogurt”.

Kalymnos is a as good as it gets for rock climbing, relaxing and savoring life. It was the right choice for us to come here at this point in our climbing road trip retirement journey. Despite the fact that it’s considered the “off-season” this early in the year, we’ve had a successful trip thus far. We’re rewarded with climbing solitude while we test ourselves on normally high traffic, world class routes. The prices for flat rentals and restaurants are somewhat reduced at the few places open during non-peak season. The pace is slower for everyone: locals and the small smattering of tourists. So, we relax, climb, enjoy and repeat.

It’s true that during late winter season, some of the tufas weep slightly. Many of the stalactites occasionally drip. It’s not uncommon to take a water droplet in the eye when scouting movement above during an onsight. Regardless, most of the features are big enough or prevalent enough to find dry surface area to latch and proceed blissfully onward, or upward. Many of the routes are so steep that it’s difficult to discern… am I going up, or out? The spring moisture may add a letter to the feel of the grade, but the pure enjoyment of gymnastic movement supersedes any preconceived grade level attachments.

It’s also necessary for the early season Greek Island traveler to be aware that the Aegean Sea has not yet had the time to warm to a tolerable level. With the air temperature averaging a pleasant-for-climbing high of 60f degrees this time of year, swimming in the ocean is probably not a viable option. Even if the temps were tolerable for a dip in the salty sea, I rationalize that there are likely to be sharks. I fear, perhaps irrationally, any fish large enough to consider me a potential food. Instead, I enjoy taking notice of a sea filled with a smattering of small islands, boats, dolphins, intense storm fronts and occasional breathtaking sunsets. All of these guarantee to entertain the mind’s eye far greater then the best Hollywood movie, X-box game, television program, Super Bowl game, or Las Vegas show could ever provide.

We love it here. It’s hard to imagine any climber not loving it here. Our only regret is that we didn’t allow more time for our trip to paradise and that we had to leave our two mutts behind, even though they are in the good company of trusted friends. In hindsight, five weeks seems short. With only a few days left in our Greek odyssey, we’re already working on a plan to return again as soon as we can. Yes, it’s that good!

A couple things: 1. Although we’re not professional photographers, the pictures we take and use are, well, ours. Friends and readers are welcome to repost them on Facebook or other personal social media accounts, but please ask if your intention is to use them for any sort of business or product promotion outside of our established relationships. We post photos taken by others with their permission, which you should also obtain if you wish to use them. 2. The ads below show up because we’re too frugal to pay enough to make them go away. They’re not usually for anything we endorse or support.