A few nights ago, the concept of “projecting routes” became the topic of discussion with a couple of friends we recently met while bouldering in Moe’s Valley. Adam and Haley visited us for an evening of conversation and to share the warmth of Alexander Superscamp’s thermostatically controlled heater on a typically cold southwestern desert winter night. During our conversation they appeared to be somewhat surprised when we related our tentative schedule to remain in the area for two or three more months. They were fascinated by the fact that we could stay in the same location for such a long period of time, about five months total if we stay as planned. I think it appeared odd to them since we have the opportunity to travel whenever and wherever we desire now that we’re retired and living on the road full time.

Defending our sanity, Maggie and I explained that our goal, first and foremost, was to send hard sport routes. It benefited us to stay for prolonged periods in a given area to acclimate. Maggie added that it often takes a couple of weeks to discover good project lines that inspire us to want to try hard, extracting our best efforts. I mentioned that heightened motivation levels for an area will depend on a vast array of things, including the style of climbing. Maggie interjected by commenting that it must be steep and gymnastic! I continued by stating that we need a comfortable camp scene since we spend more days resting than we do actually climbing with our Monday/Wednesday/Friday climbing routine. Maggie conceptualized that we ideally needed easy access. The approach needs to have a decent trail, ideally not too extreme, since we hike at an inordinately slow hiking pace. I (half) jokingly mentioned that we needed the extra time since we’re chronic sufferers of “senior age syndrome” and at our age, pretty much everything we do takes more time. Maggie itemized some of the simple things, like waking up in the morning, making a good cup of java or preparing a good Zone breakfast. All are all slower for geezers like us. I finalized the rant by adding how it takes extra time for Maggie to choose the right outfit to wear (ha ha), plus, warming up my ancient muscles at the start of the day is a slow process that cannot be rushed by any means. We basically move at glacier speed.

Then came the loaded question from Adam. He wondered what we considered to be a hard project? Maggie explained that it was typically something in the realm of 5.13 to 5.13+ for her and slightly harder for me. Both Adam and Haley appeared to be a little shocked. Possibly skeptical? Like maybe they thought we were full of BS? I’m sure they were thinking that due to our advanced age and the fact that they had observed our less than stellar bouldering capabilities that we were feeding them a line laden with shit. Adam then humbly commented that he had a goal of doing a 5.13 someday. Haley mentioned that he had recently redpointed a 5.12. Adam added that he would typically give a route only two or three tries before moving on and that he really preferred onsighting over projecting.

We’ve had similar conversations this past year with friends that we’ve met on the road. It’s an interesting juxtaposition many climbers face regarding how much time to spend on a particular route or boulder problem before giving up and walking away. While I’ve relished the few onsights I’ve mustered during my lengthy climbing career, it was the hard earned, ass kicking redpoints that are most memorable to me. There’s a reason most of us redpoint routes well above our onsight level. Onsighting exploits our strengths, while redpointing generally involves taking the time to overcome a weakness. The more weakness you convert into strength, the more your performance level improves, no matter which mode you prefer. I’m by no means an expert, but I’ve learned a few things through the school of hard knocks over the past 60 years of life. Most of all, I’ve learned that while pursuing the never-ending-road-to-climbing-perfection, the single most important thing is to WORK YOUR WEAKNESS!!!

Working a weakness (or weaknesses as the case may be) is, without a doubt, the most challenging thing for any athlete to do. I find it extremely challenging, even though I know the extreme importance of doing so. It requires us to look deep within our personal psyche for an honest assessment of what our personal weakness is. This often not an easy truth to face. Once a weakness has been determined, it becomes imperative that we train that weakness to the level that it becomes our strength… ideally.

It’s a lesson I was lucky to learn early on in my climbing career, even though it came from an unrelated source. When I first started martial arts training (eons ago), I was incredibly weak on the left side of my body. The right side of my body was clearly dominate from both genetics and years of playing one sided team sports. My right side alone was quite strong and it allowed me to perform reasonably well in my early martial arts career. However, it didn’t take long for savvy adversaries to catch on to my limited one-sided attack and defense. My wise instructor saw me struggling and explained that martial arts was an ambidextrous sport. He confronted me with my weakness and mandated that for the next three months I was to train only the left side of my body. Ouch!

Occasionally, by habit, I would use my right arm for a block, or counter attack in the heat of battle. My instructor decided to tie my dominate arm behind my back forcing me to participate in lengthy sparring sessions as a “lefty” only. I looked and felt silly as I was getting pummeled by much weaker sparring opponents. In the beginning I did nothing but left jabs, followed by clumsy left side-kicks. Left back-fists were followed by weak left round-kicks. Often I’d attempt a left block, than SMACK, I was looking up from the floor at a smiling opponent. It was truly frustrating. I almost quit. By the second month things improved slightly. By the end of the third month, my instructor lifted the left side only mandate. I quickly discovered a newly acquired equilibrium. My right was still strong and capable despite the lack of use and I had all but forgotten which side was dominate. In a short three months, I had doubled my arsenal of weapons to use in sparring sessions simply by working my weakness!

Working a weakness is perhaps the most difficult and yet, most important aspect of climbing performance improvement. Maggie and I share the same weakness of pure power capability, i.e., maximum fast-twitch muscle fiber recruitment. We continually face the fact that we look silly bouldering, but by paying our dues now our shared strength and passion for climbing long, steep and incredibly gymnastic sport routes will be enhanced greatly. Sometimes, it is necessary take a step backward in order to gain two, three or even four steps forward. We will remain here in Moe’s slapping wildly at the surrounding giant pebbles of Moe’s, hoping not to hurt anything more than our egos. That which doesn’t kill us will serve to make us stronger! 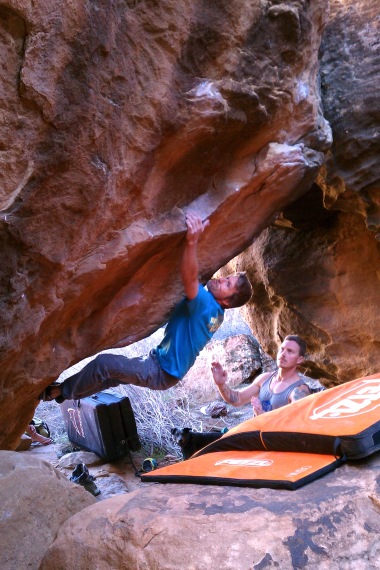 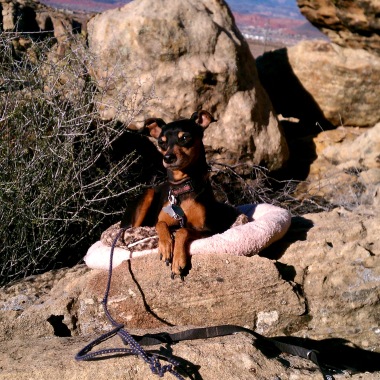 A couple things: 1. Although we’re not professional photographers, the pictures we take and use are, well, ours. Friends and readers are welcome to repost them on Facebook or other personal social media accounts, but please ask if your intention is to use them for any sort of business or product promotion outside of our established relationships. 2. The ads below show up because we’re too frugal to pay enough to make them go away. They’re not usually for anything we endorse or support.

3 thoughts on “Witness the Weakness…”