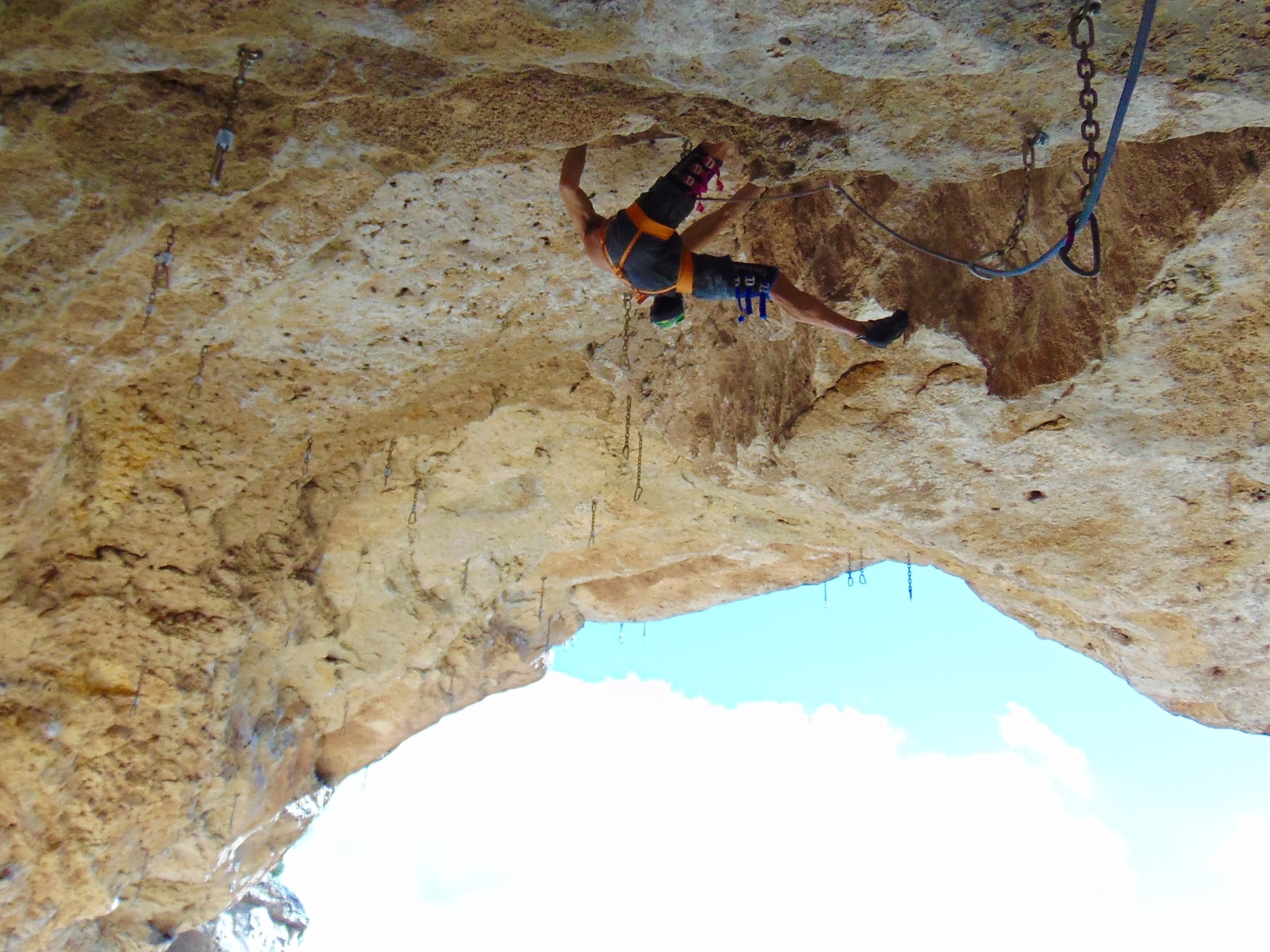 We left the unseasonably cold wet conditions of Victoria Canyon (South Dakota) with a plan to head east to the Red River Gorge (Kentucky) for the late fall climbing season. Literally, and at the last minute, we made a sharp right turn as we headed out of Rapid City. After traveling 950 miles (south!) we found ourselves in the remote unincorporated town site of Queen, New Mexico. A long, long way from the Red.

Upon arrival here we discovered the four mile long forest service access road (FS-525) leading into Last Chance in extremely rough condition. Later we found out from a local that this was the result of a recent late season monsoon storm. Mud holes, some as deep as two or three feet, crossed the entire width of the road in several places. We decided to make our camp less than half a mile from the remote stretch of Highway 137, to allow us to drive the remainder of the four miles of rough road in our pseudo 4WD Element without Alexander SuperScamp tethered to us.

On our first attempt, the drive took nearly an hour to negotiate. Alas, we made it to the trailhead and excitedly hiked down into the canyon. The climbing looked phenomenal and we decided to stay for at least a couple of months. We’re shooting for the end of December, but we’re also keeping in mind that although we’re near the southern border of the US, we’re camped at 5660’ of elevation with an El Nino weather pattern parked firmly off the coast of California for the coming winter. Despite this condition, the daytime temps are currently averaging between 65-75f, with the night temps clocking in at around 45-55f. Pretty much typical for this time of year and great for rock climbing! On warm sunny days we have a plethora of climbing projects on the north-facing walls of the Mad Cow and Hueco Cave area. For cooler days we have projects galore in the wind-sheltered, solar-receiving Solstice Cave, which is dead south-facing. The lower angle sun, typical of this time of year, heats things up nicely to the depths of this medium sized overhang. Overall we’ve found the steep limestone climbing here to be incredibly fun and considerably challenging.  The routes consist of a nice mixture of pure power and power endurance movement. Even some of the technical routes are to our liking, and as most of you know, we normally consider technical, or anything closely resembling slab, to be like the plague! Routes range from bolted 5.8 slab to nearly horizontal 5.14 minus. The higher quality and larger number of routes lie in the mid-5.12 to mid-5.13 range which is very much in line with our current climbing desires. The camp scene is primitive and quiet, so quiet in fact that it took a couple of nights to re-acclimate to the nearly pure silence after travel nights spent parked at rest areas. Although there are a handful of folks living in nearby Queen, they too appear to like quietude, since we rarely hear a peep even though we’re a mere half mile away. The silence is broken occasionally when we are entertained by the song of the coyote during the late evening or early morning. Daily we experience the pleasant songs of a variety of desert birds. The booming who-who-WHOOOO-WHOOO-WHOOO of the Great Horned Owl also breaks the stillness of random silent nights.

Since we maintain a Monday, Wednesday, Friday climbing schedule (weather permitting) we limit our trips to town, making the journey to civilization on Saturday or Sunday. Carlsbad is the closest city with plenty of stores, gas stations, laundromats and a nice public library with Wi-Fi. It’s 50 miles southeast of our camp in Last Chance. Roswell is larger, with better options for stores and amenities in general, but it’s 100 miles northeast.

Fresh water is available only 3.5 miles east of our camp at the Guadalupe Mountains Forest Service field station, making it easy to stay hydrated and shower frequently (bonus!). We use a simple five gallon solar shower, and we have a nifty little cheap shower tent to help block the wind and provide a small amount of privacy from potential voyeuristic coyotes, desert birds, jack rabbits and such.

We’ve quickly discovered that there are many things indigenous to the southwest desert that will bite, sting or poke you if you’re not paying attention! The entire list is huge, but here are a few higher priority things to watch out for…

We’ve learned to watch where we step, sit or trip. Wearing long pants, stout shoes and Petzl Cordex gloves for the hike in and out of the canyon is advised. Leashing your mutts, if they’re not desert savvy, will save a lot of potential misery as well.

Despite all the potential hazards like rough access road, deafening silence, extremely remote location and a strong potential for El Niño winter conditions… we are enjoying the quiet nights, warm days and excellent stone. We give Last Chance a solid two thumbs up! 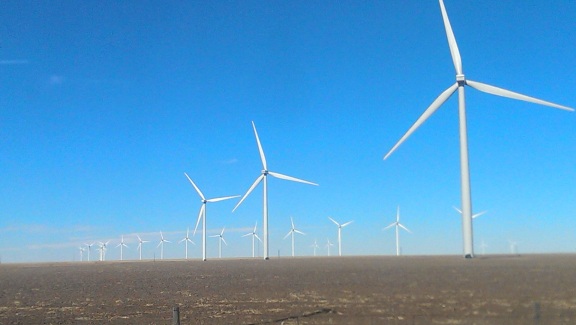 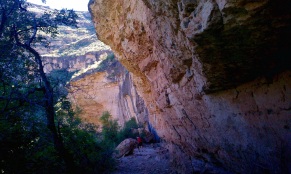 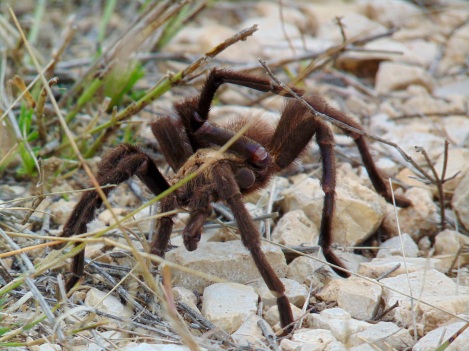 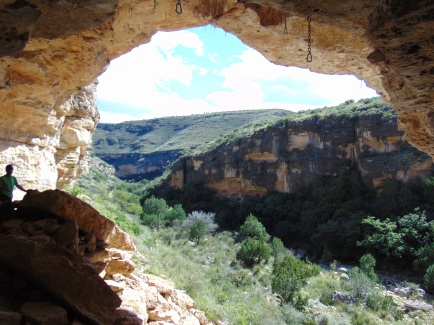 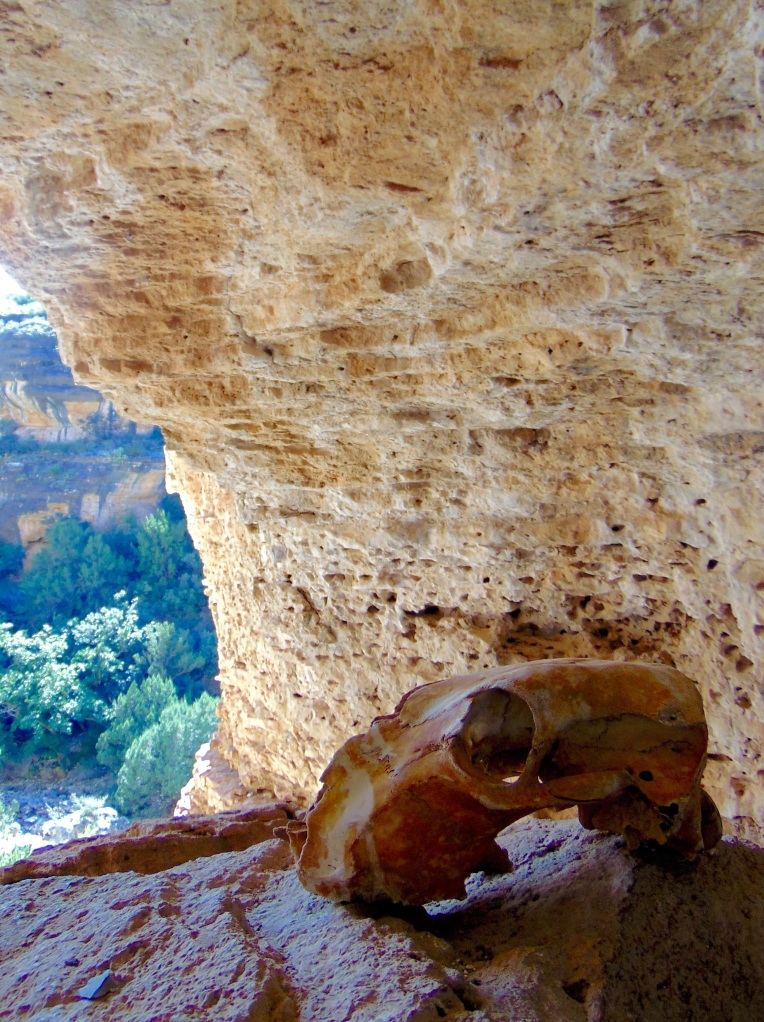 A couple things: 1. Although we’re not professional photographers, the pictures we take and use are, well, ours. Friends and readers are welcome to repost them on Facebook or other personal social media accounts, but please ask if your intention is to use them for any sort of business or product promotion outside of our established relationships. 2. The ads below show up because we’re too frugal to pay enough to make them go away. They’re not usually for anything we endorse or support.

2 thoughts on “Taking a Chance on Last Chance”